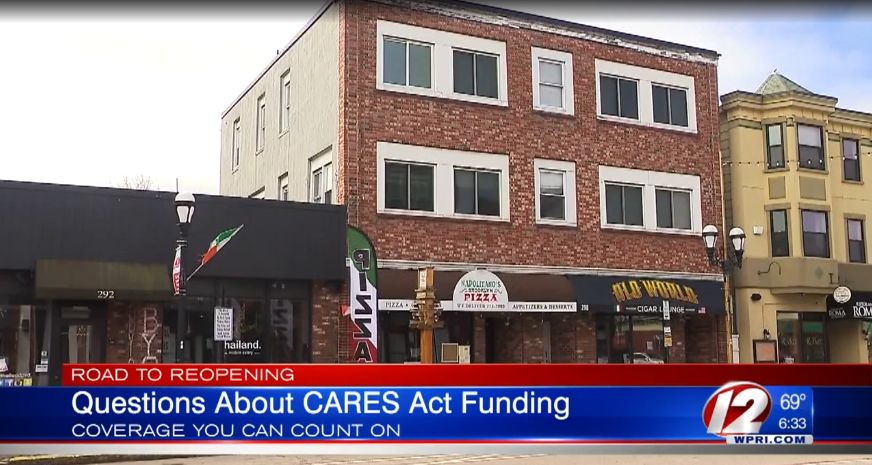 Potential business closures would carry a ripple effect with them, Rep. John Lombardi, D-Providence, noted, saying they would lead to more people on unemployment, which would then cause an increase in housing issues.

PROVIDENCE, R.I. (WPRI) — A group of daycare centers, gyms, and other small businesses in Rhode Island are making a push to receive federal money earmarked for the state’s COVID-19 response as they hope to get on the road to reopening.

Members of the R.I. Small Business Coalition got together with Lt. Gov. Dan McKee and other elected officials on Tuesday to ask for roughly 10% of the $1.25 billion the state receives through the federal CARES Act to help keep their businesses afloat.

An online petition launched by McKee and the coalition to build community support had already received more than 2,500 signatures meeting its goal.

Small businesses make up more than 98% of business in the state, according to the coalition.

“Small businesses are the backbone of our economy and the heart of our communities,” McKee said. “I commend our state’s small business owners for taking time away from running their businesses to unite, organize and support each other across industries and communities in a way that Rhode Island has not seen before.”

As many struggle with the financial burdens brought on by forced closures due to the pandemic, coalition leader Chris Parisi says assistance must be made available sooner rather than later. He’s urging elected officials to sign the petition and stand with the small business community.

“We can’t wait,” Parisi said. “Each day the governor holds onto these funds, more small businesses are dying.”

Local business owners echoed the harsh reality of operating after months without revenue, coupled with the increased costs fo doing business upon reopening.

“In just a few short months, my small business went from a growing company with 12 employees looking to expand to cutting programs, downsizing our staff, and dealing with a projected $100,000 gross revenue loss from projections for 2020,” said Judah Boulet, owner of No Risk CrossFit in Smithfield.

Potential business closures would carry a ripple effect with them, Rep. John Lombardi, D-Providence, noted, saying they would lead to more people on unemployment, which would then cause an increase in housing issues.

The coalition said a handful of other states have already given businesses hundreds of millions of dollars in grants, most notably in New Hampshire where small businesses received $440 million.

On Tuesday night, Commerce Secretary Stefan Pryor took questions from the Senate Finance Committee. He says he believes it is essential to get as much of the economy back open as soon as possible.

“No amount of government subsidy or investment is going to replace the economy being open and people shopping or otherwise supporting doing business with our small businesses,” he said.

The Senate Finance Committee is asking the governor’s office to work with them on drafting legislation to make this happen.

The committee is scheduled to meet again on Thursday.